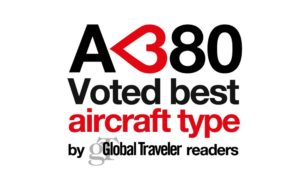 More than a decade after its maiden flight, the popularity of Airbus’ A380 has never been higher among airline passengers around the world – evidenced in part by this game-changing jetliner’s recent recognition as Best Aircraft Type by the U.S. publication Global Traveler.

The honour was voted by Global Traveler’s travel-savvy readership as part of its 11th annual Tested Reader Survey Awards, which were presented last night during a ceremony held in Beverly Hills, California, USA. It marked the first time the Best Aircraft Type distinction was won by a non-Boeing airliner.

On hand to accept the award on 8 December was Airbus’ Head of A380 Business Acquisition, Didier Nasarre – who in his speech explained how passenger preference increases brand value for airlines, citing the A380 as a primary example.

The A380 provides a typical capacity of 544 passengers in a 4-class configuration, seated on two spacious decks. Boosting the strong customer appeal is its unmatched passenger comfort and quietness, to the point where 65 per cent of passengers would take the extra effort to fly on an A380, according to recent studies.

Airbus knows how much passengers appreciate the A380, as well as how vocal they can be. It is for this reason the company launched its A380love.com website with a digital “social wall” that gathers and displays all the incredible feedback from A380 travellers worldwide.

The A380 love isn’t exclusive to passengers, however, as airlines are quite smitten as well. This flagship Airbus jetliner is proven to attract high-revenue travellers day after day, stimulating demand and offering the best capacity to match requirements at peak hours. By combining the opportunity to capture growth, unmatched comfort and global accessibility, the A380 enables airlines to define new opportunities – and own the sky.

In addition, the A380 boosts branding sentiment – showing an average increase of 40 per cent, and clearly stands out as the most popular aircraft in an airline fleet.