Airbus, Emirates airline and aircraft leasing company Amedeo teamed up on Thursday in a charm offensive to sell U.S. airlines on the world’s biggest jetliner, the Airbus A380.

But the pitch was not made directly to airlines. Instead, the companies came to New York to convince airline shareholders and Wall Street analysts that the massive aircraft will not threaten industry profit margins and in fact would make economic sense.

If U.S. airlines don’t use the A380, “they are leaving profits on the table for others to take,” said Mark Lapidus, chief executive of Amedeo, speaking on the sidelines of a briefing at New York’s John F. Kennedy International Airport. 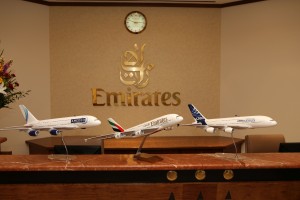 “We are a little concerned with how the Street will react to enlarging capacity,” he said, noting that the executives of Airbus, Emirates and Amedeo are here to “broaden their knowledge” of how the airplane can make money.

By flying 500, 600 or more passengers into airports such as London Heathrow or Hong Kong, airlines can accommodate growing demand for air travel without adding additional flights.

Dubai-based Emirates, the largest A380 buyer, said the aircraft is crucial to its strategy and noted it has been consistently profitable for more than 20 years.

“We’re able to use it to grow revenue in a way that we wouldn’t be able to do with any other aircraft type,” said Nigel Hopkins, an Emirates executive vice president.

The major U.S. carriers, American Airlines Group, United Continental Holdings and Delta Air Lines, do not currently use the A380 but are facing growing competition in the United States from Emirates and other carriers that do.

With many airports “slot constrained” – at or near the limit of number of takeoffs and landings they can handle – airlines face limited scope for revenue growth. But Emirates has nearly doubled its revenue in seven years at London Heathrow, using the A380 and just five slots at that constrained export.

“This is where the A380 really excels,” Hopkins said.

Even in airports that are not constrained “there’s more than enough demand to justify an aircraft of that size,” he said.

The briefing came a day after Emirates canceled 70 orders for Airbus’ new, A350 aircraft, which is smaller than the A380 but has newer technology. [ID:nL5N0OS11N]It also comes as Amedeo seeks lease customers for 20 Airbus A380s it agreed to buy in February. It has not yet announced which airlines will use those jets, due for delivery in coming years.

An analysis at the briefing showed that of the top 20 global routes, 15 are slot constrained and that about 150 A380s could be used on those routes, while only about 35 are currently deployed there.