Amedeo’s plan to broaden A380 customer base

“Airbus mis-sold the A380 as a luxury airplane, then they allowed people to move things on the aircraft too much,” says Lapidus. “With the A380, Airbus started with: ‘It’s a big piece of real estate; do what you want to do.’ That has not helped with the key factors that are great on this aircraft, which are the lowest seat-cost economics of anything flying today or in five years.”

Lapidus says that on the A350 and Boeing 787, customers are not offered as much cabin configuration flexibility because both manufacturers learnt from Airbus’s painful A380 experience. “There are fixed monuments where galleries are positioned and customers are not allowed to make large changes,” he says.

Amedeo’s $8.3 billion firm order at Singapore confirmed the commitment announced at last year’s Paris air show. Deliveries will start in late 2016 and continue through to 2020. Engine selection has not been finalised.

Amedeo aims to unlock demand for the A380 and secure operators outside the existing customer base by concentrating on simpler, higher-density configurations which will also help keep reconfiguration costs low – a vital consideration in the leasing sector.

The lessor offers a baseline three-class 573 seat configuration, which it says provides “unbeatable seat-mile costs”. This layout comprises 427 18.5in- (47cm) wide economy seats on the main deck and 146 premium and economy seats on the upper deck – 12 first, 66 business and 68 economy.

Lapidus says that in such a configuration the A380 can carry over 600 passengers, and points out that Emirates is planning to introduce a 617-seat layout on its aircraft next year. “That’s with 19in-wide seats at 10-abreast,” he says.

He adds that 11-abreast configurations are “on the table” with potential customers, which will add up to another 35 seats on the main deck.

The highest-density configuration flying on the A380 today is Air France’s 538 seats – one of six configurations currently in service with more than 500 seats. Next year, Transaero is expected to set a new benchmark when it takes its first A380, which will be equipped with 648 seats.

“The A380 configurations in the market today are the product of demand from airlines who choose the layout that provides them with the desired first/business/economy ratios to fulfil their passenger and revenue demand profile across their higher-density medium and long-haul networks,” says Rob Morris, head of advisory at Flightglobal’s Ascend consultancy arm.

“Airbus, of course, initially marketed the A380 at a 555-seat standard three-class layout and the reduction to 525 seats was a product of airlines’ applied configurations, rather than an Airbus initiative to market the aircraft as ‘more luxurious’ than other long-haul products.

“So ultimately it will be customers who decide if the addition of more seats, to drive reduced unit costs, broadens the market appeal of the aircraft.”

Amedeo is yet to secure any customers for the A380s, but hopes to sign its first leases this year, says Lapidus. Target customers are those “large network carriers – the world’s top 10 airlines – who do not have the A380″.

Morris notes that “around a third of today’s 747-400 passenger fleet operates above the (unweighted) average seating total”. He adds: “Most of the 18 operators in this group are non-A380 customers and most have relatively small fleets. So perhaps these represent the target customer base for Amedeo – but this is quite a small group.” 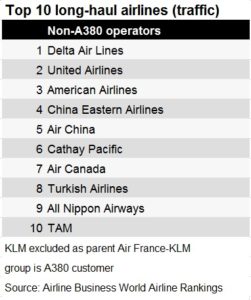 Morris points out that the A380 is a “relatively older” programme which incorporates technologies from the 1990s. That is why operators like Emirates and Singapore Airlines are pushing for upgrades that could also create significant seat-mile cost improvement. “This is an area that Airbus must be considering if they are to enhance the competitiveness of the A380 and further broaden its operator base in today’s market scenario,” says Morris.

Lapidus sees longer-term benefits from adopting advanced engine technology but does not believe there is any need for an early move: “Right now the A380 offers economics which are unbeatable, it just needs to be properly configured. In that respect, it would seem to not necessarily make sense to get a [re-engining] programme going now,” he says.

“But sometime after 2020, I don’t think [re-engining] is a bad idea and it speaks very highly of what people think about the success of this aircraft when they are considering spending $1-2 billion on re-engining. It would be a big investment into what many people mistakenly think is not a very successful programme.”